How international stabilisation failed in the Democratic Republic of the Congo

What has been going wrong in the Democratic Republic of the Congo?

Why has the most expensive UN peacekeeping mission in history been unable to end violence after fifteen years of continuous deployment? Why does the country reappear every year, without fail, among the world’s largest appeals for emergency aid?

Follies in Fragile States explores how we got to this point. It is the first inside account of the ‘stabilisation’ effort in eastern Congo from 2007 onwards, cutting through the spin and academic mystification to identify the key decision points and where things went wrong.

The picture that emerges is a studied and often painful reflection on personal and institutional failure. It echoes the best muckraking work on the Afghanistan and Iraq wars—authors like Tom Ricks, Graeme Smith and Rajiv Chandrasekaran—but for a conflict that is infinitely less well-understood.

There’s a lot of bad writing out there. That’s why the Introduction is free to download, setting out the plan of the book and its core ideas.

So give me half an hour to convince you that what happened in the Congo is not just important, but also a great story:

The ebook and paperback versions are now available from Amazon, and the paperback from other major retailers. You can get your copy for USD 15, with a little variation in local currencies.

Visit page on Amazon.com or amazon.co.uk. 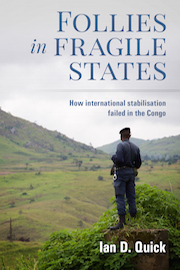